Flood Cars On the Rise 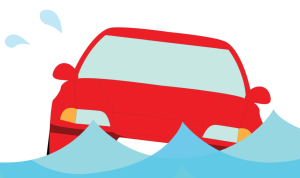 In the aftermath of Superstorm Sandy flood-damaged vehicles are washing up at auctions and dealerships around the country.

The end of October 2012 witnessed what has become the 2nd costliest hurricane in US history. Superstorm Sandy spared the normal “danger zones” of the Southeast and instead caught the citizens of New York and New Jersey by surprise with an estimated $50 billion in damage. In comparison Hurricane Katrina had $128 billion in damage (adjusted for 2012 dollars).

After Sandy, more than 650,000 homes in the US were damaged or destroyed and 8,000,000 people were without power. In addition to the homes and businesses that were devastated by the storm, current estimates total over 500,000 vehicles that had flood damage. Most of the damage was from storm surge salt water which, even at minimal amounts, almost always causes vehicle damage beyond reasonable repairs. While the vehicle may be able to be cleaned up and even run well for a period of time, its rapid deterioration is inevitable. Electrical issues, frame and engine corrosion, failing brakes and even mold will start to surface. The car eventually becomes unsafe to drive, if it even continues to run at all.

The National Insurance Crime Bureau (NICB) currently estimates that there have been approximately 250,000 insurance claims on vehicles as a result of Sandy. The NICB is a not-for-profit organization that receives data from nearly 1,100 property and casualty insurance companies. These numbers came out in late February, so it is very possible they will be revised to a higher number in the future. The majority of these cars have been deemed total losses by the insurance carriers.

Determining the amount of damage on a flood car can be very tricky to an insurance claims adjuster who may be unable to evaluate the extent of the damage without disassembling components such as door panels and engine parts them to inspect for water and corrosion damage. While rust and water are the obvious issues, the electrical systems create the real problem for insurance companies. When electrical components have failed, the components have to be removed individually and substituted on a trial and error basis to determine which are failing. The suspected components would then be replaced and a system test using manufacturer supplied test equipment would be needed in order to determine if the system is again functioning. This process would need to be completed by the franchised dealer and is far beyond the scope of what an independent, insurance company approved body shop has the capability of doing. The tedious troubleshooting that is required makes it almost impossible for an insurance company to estimate the cost of repair forcing them to treat the vehicle as a total loss.

Once an insurance company “totals” a flood damaged vehicle and the claim settlement occurs, the various state agencies require that the vehicle’s title be “branded” telling any future buyers the status of the vehicle. This “branded” title is then reported to the National Motor Vehicle Title Information System (NMVTIS), the national database of vehicle histories. If everything is working according to plan, a buyer of a vehicle in Florida should easily be able to determine if that vehicle had been totaled by an insurance company. With this knowledge, that buyer could then make an informed decision on whether they want to purchase it or not.

While NMVTIS is a good start at managing the problem, the system isn’t perfect. There are current reports of insurance carriers not “branding” the title as required or reporting it prior to its sale at salvage auctions allowing the vehicle to be sold with a clean title and into other states with the buyers having no knowledge of its history. Even if the title is branded, the vehicle may be moved to a different state and retitled under that state’s laws as a clean title through a process called title “washing.” Finally, there is no standardized branding system across the different states making it difficult to identify the vehicle’s flood history.

In addition to the issues the NMVTIS project has, it doesn’t address any of the estimated 250,000 uninsured vehicles. The sad truth is that many of these vehicles are making their way back into the marketplace and being sold to unsuspecting buyers as well.

These vehicles come from a number of sources including but not limited to:

• Self insured commercial fleets— Companies send the damaged vehicles to salvage auctions under the original clean title paperwork. Most of the salvage auctions report these sales to NMVTIS, however the paperwork will still show as clean.

• Privately owned vehicles—These are often sold on sites such as Craig’s List or Ebay or sent to out-of-state auctions. In most cases, the owner of the vehicle has no legal duty to disclose the damage so a less than scrupulous rebuilder could repair it and sell it as a clean vehicle. This sale could take place privately or through an auction placing the retail dealer at risk. Not knowing about the damage, the dealer sells the car to a customer on ly to have them return with their attorney months or years later.

So what can be done to avoid ending up with one of these cars as either a consumer or a dealer? First, check the NMVTIS database. The vast majority of vehicles being totaled by insurance companies will show up there. If the vehicle is not in the database, it’s up to the buyer to do whatever investigative work they can to track down a problem.

The second process would be an extensive inspection. Most dealers have the experience to spot flood damage on the surface, but the lack of any signs of water doesn’t guarantee the vehicle is safe. For example, a large used car dealer noticed he had been doing an unusual amount of brake jobs on low mileage cars and decided to take a closer look to see why. To his surprise, once the door panels had been removed there were signs of corrosion caused by salt water. This damage was not visible at the time of purchase. Not wanting the liability of selling a damaged car, this particular dealer ran the vehicles back through the auction under a “Red Light” and took a large loss. Unfortunately, these vehicles will still end up being sold to retail buyers by dealers willing to “roll the dice.”

Another way to protect against unknowingly buying a flood damaged car, is by getting a Post-Sale inspection (PSI) when offered at the auction. A PSI, can range between $75 and $100 and includes a rigorous check of the vehicle for numerous items including flood damage.

At the end of the day, many of these vehicles will make it back out onto the highways of the country and there is very little that can be done to stop it. Be vigilant in your investigations before buying your inventory and avoid taking any chances.

Kevin O’Connor and Dealers Insurance Services have been helping dealers with insurance needs for 27 years. He may be reached at (321) 285-9678 or online at www.dealersinsurance.com.