Dealers Open Lot: It Pays to Know if You’re Covered 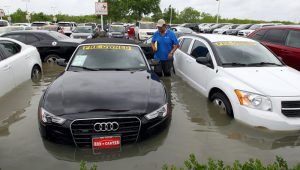 “The Times, They Are A Changin”

Ever since Hurricane Andrew, insurance companies began limiting their weather exposure in Florida when it comes to Dealers Inventory Insurance. Many carriers have been excluding or, at the very least, limiting wind & hail coverage. This “tightening” in the market keeps getting worse. Superstorm Sandy, Katrina, Harvey. These storms have made the insurance industry “rethink” the way they handle this exposure. Sandy was the beginning. Even though Sandy didn’t happen in Florida, the storm’s effect on the reinsurance market was felt nationwide. An estimated 500,000 vehicles were lost in the storm, mostly due to flood. Insurance carriers hadn’t paid much attention to flood exposure prior to this event, but since then, it’s a whole new ballgame. Many carriers that used to only look at the distance to the water as the determining factor are now looking at flood zones and excluding flood coverage or putting crippling deductibles on the policy.

This new paradigm shift in the way insurance companies offer coverage forces you to carefully examine your policy so you aren’t surprised if after a claim the coverage isn’t there. The following are the most critical areas to investigate and questions to ask yourself.

What type of coverage do I have?

The insurance needed to cover a dealer’s inventory is typically called “Dealers Open Lot.” There are several specific forms that can be used. Historically, “Comprehensive” and “Specified Perils” have been the norm. These forms are designed to cover weather related loss in addition to fire, theft, vandalism and the like.

Another form that was rarely seen prior to the last several years is called “Fire and Theft.” This form is showing up quite often since it eliminates the weather coverage. While the carrier is trying to eliminate the weather exposure, this form also eliminates vandalism. Of all the options out there, this one is the least desirable.

Another option you may see is where the Comprehensive or Specified Perils are provided, but with an endorsement (often times buried in the policy) specifically excluding wind, hail and/or flood. While this is a better option than “Fire and Theft,” it’s very tricky to find the endorsement and dealers aren’t always made aware of its presence.

What is my deductible?

This used to be an easy answer but has also become very confusing in recent years. Historically the standard structure for deductibles as they related to weather exposure was a “per vehicle” deductible most often of $500 or $1,000, and then an aggregate of five times the per vehicle deductible.

The term aggregate simply means the most a dealer would have to pay in the event of multiple vehicles being damaged. If you had a $1,000 per vehicle deductible, the most you would pay out of pocket after a covered loss was $5,000.

While these terms are still available, it is becoming the norm to see policies written on a “no aggregate” basis. When this happens, your post storm deductible would be $1,000 per vehicle but there would be no cap. If you had 50 cars on the lot, you could potentially be out of pocket $50,000.

To further confuse the matter, some companies are applying specific dollar amounts to specific types of loss. You may see a $1,000 deductible with a $5,000 aggregate on Comprehensive but there may be a limiting endorsement that says the weather related loss is $500 per vehicle with no aggregate. Unfortunately, these are all free form endorsements and there is really no standard to rely on.

One of the least understood parts of Dealers Open Lot coverage is the coinsurance provision. Every policy I’ve seen in my 33 years of experience doing this type of insurance has coinsurance and 90 percent of the dealers we talk to have never had this concept explained to them. Not understanding it can cause huge penalties after a claim.

Dealers Open Lot coverage requires that a dealer purchase 100 percent insurance to value. In simple terms, if you own $200,000 in vehicles, you must purchase $200,000 in insurance to avoid the penalty. Almost daily I hear dealers tell me “I only need $100,000 of coverage because that’s all my floor planner wants” or “I don’t want to cover the entire inventory since there’s no way all the vehicles will be damaged at the same time.” Unfortunately, many agents don’t explain the dangers of this either because they don’t understand it themselves, or they are just trying to get the business and don’t want to upset the apple cart.

The formula to calculate a coinsurance penalty is simple: “did over should”. In the event of a claim, the insurance carrier takes the dollar amount of what you “did” buy for coverage and divides it by the amount that you “should” have bought for coverage. That percentage is the amount they pay. Let’s look at a simple example:

How do you avoid these problems?

Make sure you buy from a reputable agent and ask a lot of questions. It can be difficult these days to navigate the different plans being offered. While your agent and the proposal they offer should be a good starting point, there is no substitute for you actually reading thoroughly through your policy and becoming educated.